Bixa orellana (Bixaceae) - annato, lipstick tree; native to South America. The genus Bixa is monotypic and a member of the family Bixaceae (16 species in 3 genera). The species is especially cultivated for its red colouring obtained from the testa of the seeds, the original Amerindian body paint which is also effective as an insect repellent. The red colour is due to several apocarotenoids located in the seed epidermis, of which bixin (9'Z-6,6'-diapocarotene-6,6'-dioate) is the most important. Several more carotenoids and apocarotenoids have been identified; their total amount varies strongly, but may reach up to 7% of the dry seeds' mass. Bixin was formerly an important dyestuff but is now replaced by Congo red for fabric but still used in food esp. cheese, butter, margarine and chocolate as it is almost tasteless. It is also used in soaps and other skin products (there sometimes also called the lipstick tree). Bixa orellana, also called annato, possesses extrafloral nectaries to attract ants that ward off predators (seed production doubles in the presence of ants) (from Mabberley 1997 and Gernod Katzer’s Spice Pages). Common names for Bixa orellana include: Orleansbaum, achuete, annatto, urucum, urucu, rocucou, anato, achiote, kuswé.
The scientific species name orellana reminds to Francisco de Orellana, a Spanish explorer of the 16th century. Together with Francisco Pizarro, Orellana had been involved in the destruction of the Inca empire; in 1540, he participated in another expedition led by Gonzalo Pizarro. Following rumours about gold and cinnamon trees, about 2000 Spaniards entered to Peruvian and Brazilian jungles, where most of them perished. Orellana abandoned the party and made his way eastward, where he (more or less by chance) discovered the Amazonas river and earned scientific fame quite undeservedly. By confusion of the Spanish name with the French town Orle 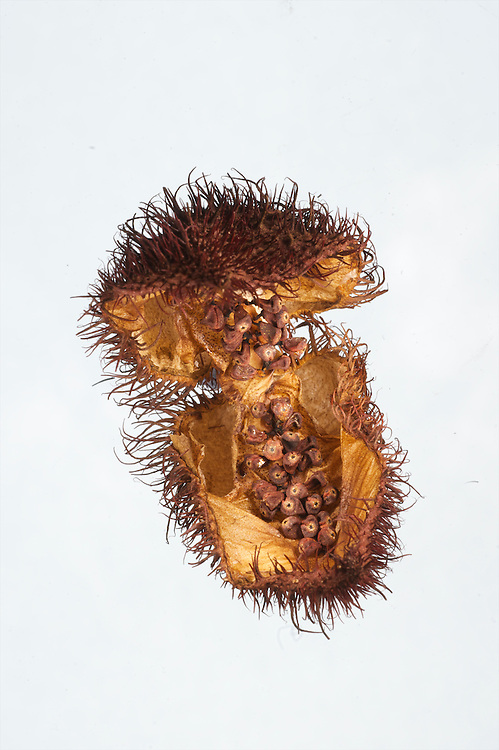